Thetis was a sea-goddess, the most famous of the Nereids, short-time wife of Peleus and mother of the greatest hero of all under Troy, Achilles.

Daughter of Nereus and Doris, Thetis was raised by Hera, and, as a maiden, was desired by both Zeus and Poseidon. However, since it had been prophesized that Thetis’ son was destined to be greater than his father (whoever he might be), the Olympian brothers had to give up on pursuing the mesmerizing nymph.

Instead, they married her off to a mortal, choosing the hero Peleus as the most deserving of her hand. Thetis begged to differ: though she did agree to marry Peleus (more or less, under duress), she abandoned him soon after giving birth to the couple’s only son. Quite probably, she did it because Peleus dared to interfere with her attempts to make Achilles immortal. Also, because she deemed him unworthy of her in any way imaginable.

Though a proud and independent goddess, Thetis was a very caring and loving mother. She did her best to keep Achilles safe from harm at all times, going so far as to even reveal to him his future, so that he can trick his fate; instead, to her despair and regret, he chose to embrace it. 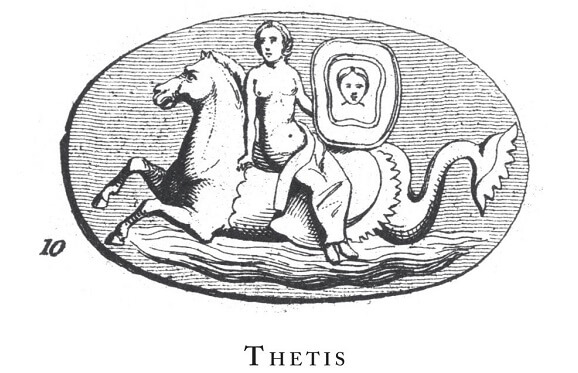 Stories and Facts About Thetis

It is a little-known fact, but it is, nevertheless, a true one: Hera was Thetis’ stepmother.

Now, we don’t really know how it came to be for Thetis to be fostered and reared by the queen of the gods, but, according to both Homer (Iliad xxiv.59-60) and Apollodorus (iii.13.5), she most certainly was.

Otherwise, by birth, Thetis was a Nereid, that is, one of the many daughters of the kind sea-god Nereus and the Oceanid Doris.

Thetis Was the Stepmother of Her Stepmother’s Son, Hephaestus

Here’s another piece of bizarre family trivia regarding Thetis: she was the stepmother of her stepmother’s son.

Apparently, after giving birth to Hephaestus, Hera was so disgraced and disgusted with his deformities that she hurled him from the heavens into the deep, vast sea.

However, Thetis rescued him and, together with her Nereid sisters, she nurtured Hephaestus back to health and even cared for him for the next nine years (Homeric Hymn to Apollo 317-321).

Soon after deposing his father from the throne, Zeus, corrupted by the immensity of power, started acting all Cronus to his subjects. Unsurprisingly, it didn’t take too long for the other Olympians to rise against him.

Having had enough with his petulance and despotic measures, one night—after carefully planning out their rebellion—Hera, Poseidon, and Apollo suddenly surrounded the sleeping Zeus and bound his body with hundred-knotted rawhide thongs, rendering him immobile.

For a while, it seemed that Zeus’ time was up. However, the young nymph Thetis, as wise as beautiful, had some other plans.

Fearing a civil war on Olympus, immediately after overhearing Hera and Poseidon taunting the growling Zeus, Thetis rushed to Briareus, one of the hundred-handed cousins of the Titans.

Briareus wasted no time. And since to someone who has a hundred hands, the untying of a hundred knots takes no more than a second, Zeus was released just like that.

The outcome can be easily deduced: punishment for the wrongdoers, reward for the allies.

More precisely: Hera was hung from the sky, Apollo and Poseidon were made bond-servants to King Laomedon, and Thetis was promised a lifetime of granted wishes.

Zeus and Poseidon Had It Bad for the Young Nymph

Now, Zeus may have had another reason to take Thetis’ side: according to the great poet Pindar (Isthmian Odes viii.28-48), he had it quite bad for her. To make matters a bit more complicated, Zeus’ brother and sometime rival, Poseidon, was enamored with Thetis as well.

And who knows what would have happened if the quarreling gods hadn’t heard a fateful Thetis-related prophecy just before things really went haywire!

Yup, that’s the prophecy we’re talking about! And there are two stories as to who exactly made it known.

The first one is told by Pindar. He says that it was wise Themis, “the lady of the good counsel,” who broke the news to Zeus and Poseidon.

“No, cease from this,” the Titaness spoke in the assembly of the blessed gods. “Thetis should bear a son stronger than his father, who would wield in his hands a weapon mightier than your trident and your thunderbolt combined. Save yourself the trouble and marry her to Peleus, the most pious man living on the plain of Iolcus.”

Namely, according to him, Themis didn’t tell this secret to Zeus, but to her son Prometheus, aka the Forethinker (not to mention the conniving little rascal).

Now, when Zeus chained Prometheus to a rock as a retaliation for his theft of fire, the Titan used this very secret to buy back his freedom (eventually!) But not before shouting quite a few your-time-has-come threats in the direction of the stubborn Zeus.

Be that as it may, Zeus, as much as he wanted her, had to give up on Thetis, who, in yet another story (told in the lost epic Cypria), might have even rejected him on her own accord, out of respect for her foster-mother Hera.

So, in a way, this enchanting Nereid is a sort of unicorn among the mortal women loved by Zeus: The One That Got Away.

Peleus Struggled to Win Thetis’ Hand in Marriage (or: Proteus’ Manual on How to Wed a Shapeshifter)

However it came to be decided that Thetis was to be wedded to Peleus, she was certainly not one to willingly accept being married to anyone, let alone a mortal (after all, she did just reject Zeus).

Add to this the fact that Thetis was a sea-goddess capable of transforming into just about anything at will, and you can already get a glimpse of the extent of Peleus’ troubles.

Suffice to say, the courtship of Thetis wasn’t just another “will she, won’t she” teenage romance. Don’t believe us? Then, look no further than the eleventh book of Ovid’s Metamorphoses.

After happening upon the beautiful—and “quite naked” (not our words)—Thetis getting some tan in a magical cave on the Thessalian shore, Peleus approached her and tried to win her with a few “love you”-s, both in present and future tense.

Thetis wasn’t exactly moved by the advances, so Peleus (now, bear in mind, this is the ancient world we’re talking about) resorted to action and seized her firmly in his arms. Thetis, however, transformed into a tigress, scaring Peleus off, and leaving him both unsatisfied and begging.

And he begged so much—going so far to even offer sacrifices to the gods right there, on the shore—that, eventually, Proteus (though others say Chiron) took pity on him and rose up from the sea.

“Bind her fast,” he told the young man, “and wait until she goes through several transformations and back to her original shape.”

Peleus did just that, and Thetis had no choice but to yield—in all her divine majesty.

Thetis’ Marriage to Peleus was a Disaster (Blame It on an Unsent Invitation!)

After all, he had just gotten a stunning girl for a wife, one pursued by both Poseidon and Zeus! Moreover, she was a revered goddess, so that guaranteed him both a demigod for a son and one heck of a wedding guest list.

Unsurprisingly, Pindar (Pythian Ode iii.88-95) claims that nobody in the history of humankind was happier than Peleus on his wedding day!

If that sentence sounds a bit ominous, that might be because it actually is: as profound as it was, Peleus’ happiness was pretty short-lived.

One could even argue that it ended on the wedding day, when an uninvited guest—Eris, the goddess of strife—appeared out of the blue, and, purely out of spite, threw a golden apple into the jubilant gathering. The apple, inscribed with the words “for the Fairest,” triggered a bitter rivalry between three Olympian goddesses, and this eventually led to the Trojan War.

But long before that—and soon after the birth of the couple’s only child, Achilles—Thetis abandoned Peleus, deeming him utterly unworthy of her.

True, Thetis didn’t think highly of her husband at no point in her life, but once Achilles was born, she started blaming Peleus for everything. Most importantly—and, unfortunately, quite justly—for her son’s mortality. If she had had him with a god—any god—Achilles would have been immortal.

But now… Well, it’s not like Thetis didn’t do her best to draw the sickness of death out of Achilles’ body.

According to some, she merely tried to replicate Demeter’s attempt with Demophoon by secretly bathing Achilles into a fire to burn away his mortal skin and subsequently anointing him with ambrosia to fashion a new, ageless and immortal layer. One night, however, Peleus barged in on the ritual, and, noticing Achilles writhing in pain and flames, refused to listen to any of Thetis’ excuses and clarifications. Needless to add, that’s when the insulted Thetis left Peleus for good.

Others go a step further and claim that Thetis tried to make Achilles immortal by dipping him into the very river of death, Styx. The nymph wasn’t allowed to touch the water herself, so she held Achilles by his heel throughout the whole process, rendering him completely invulnerable to injuries—well, except for that one heel.

Of course, many years later, this weakness would spell the end of Achilles.

Thetis Was Progressive: She Encouraged Achilles to Become a Transvestite

Since she was adored by Zeus, Thetis had some inside info on her son: Achilles, you see, was destined to die a great hero—but only if he chooses to fight a great war.

To protect him, once the Trojan War started, Thetis dressed Achilles as a girl and sent him at Lycomedes’ court on the island of Scyros. “From now on,” she said to him, “you shall be known as Pyrrha.”

Unfortunately for Thetis, Achilles remained Pyrrha only until Odysseus, acting as a recruiter for Agamemnon and Menelaus, tricked him into revealing his identity by showing him some weapons.

Hephaestus and Zeus Paid Thetis Back During the Trojan War

Many years after helping Zeus stifle the Hera-led rebellion on Olympus, Thetis asked the supreme god for a favor.

Achilles was about to fight a duel against Memnon, the fearsome Ethiopian king, and she wanted to make sure that it wasn’t going to be his last one.

Even though Memnon was a son of Eos, the goddess of the dawn, and even though she too pleaded with the Thunderer for her son’s life, Zeus wasn’t one to quickly forget. So, without a second thought, he granted Thetis her wish; Eos never forgave him.

Hephaestus, too, paid Thetis back for her kindness and motherly care during the Trojan War. At her request, he fashioned exquisite armor for Achilles and a one-of-a-kind shield, so beautiful and intricate that Homer dedicates more than one hundred verses of the Iliad to describe it.